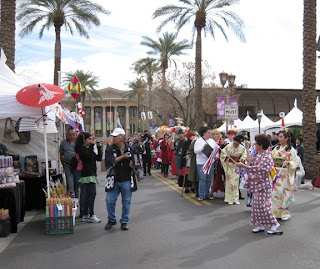 I survived the relatively sunny and nice Saturday and the cold and damp Sunday of the Phoenix Matsuri! For the second year in a  row, it rained and it was cold! (Cold for Phoenix standards. For those of you on the east coast braving snow, sorry about the whining). Only change was this year it only rained Saturday night, so it was mostly dry Sunday, just a chilly 45 degrees when we arrived in the morning for day two of the festivities. I think it probably got up to 56 degrees during the day. That means it was a great weekend to wear kimono, not at all hot! In fact, yesterday I had to wear long underwear, a kimono coat, and gloves. I never even took the coat off except in the car on the drive home.

Saturday was nice, perfect weather really: I think it got up to 65 degrees and was a bit breezy and overcast, which was perfect for parading, dancing, and the summer kimono ensemble I was wearing.

I arrived with friends that were performing taiko through out the day, so I arrived early enough  to watch vendors setting up and participate in the Mikoshi procession/parade! I learned the basic steps to the Awa odori and off we went! The dance was simple but very hard on the toes, especially if you are wearing geta.
The Awa odori was performed later on stage by Tokushima ren of Los Angeles, CA. I saw them dance later in the beer garden as well. They are really amazing. I want one of those hats! 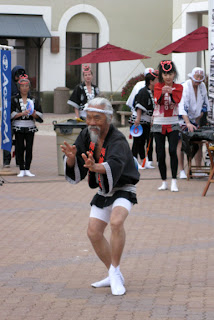 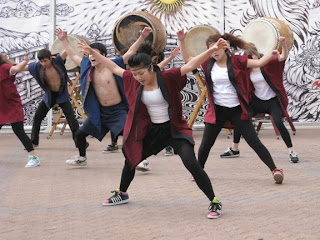 There was taiko, and yet another group of amazing dancers, this one was the ASU Japanese Student Association doing an incredibly energetic version of Soran Bushi. Soran Bushi is a fisherman's folk song and dance from Hokkaido.The dance itself is really fun and a great workout!

Of course there was much more (bonsai trees, Akita dogs, Anime fashion show, J-rock, etc.) and I didn't see everything, but I did manage to spend too much money on kimono stuff, tabi socks (pink and black Tofu Robot!), and fresh mochi with red bean paste.


OK, now the kimono pics!
For Saturday, I dressed up my friend in yukata as well. She took advantage of the final sale at Kimono Lily with the cute deep pink cotton hanhaba obi she is wearing with her traditional indigo and white iris-print yukata.  I'm wearing a synthetic sha (sheer gauze) komon, black with garnet red ivy vines; the vintage silk juban (under kimono) underneath is an all-over ume print in deep violet, turquoise, and fuchsia.. The obi is white on white hakata worn with a fuchsia obiage and a wide black and fuchsia obijime. I also wore a han-eri collar in light blue with hot pink and black sakura pattern. Black bunny geta with pink bunny tabi socks and red and black handbag complete the ensemble. This is one of my favorite spring/summer outfits.

This outfit got quite a few looks and comments  from people, probably because it was different from the girlie yukata and pastel colored kimono other people were wearing. 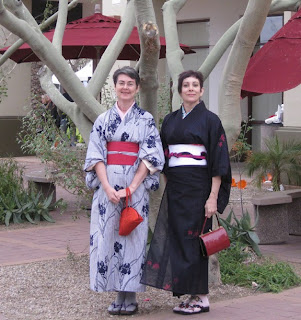 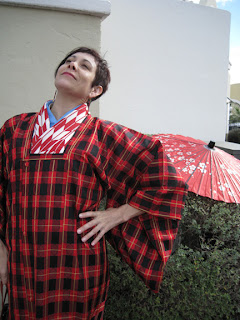 Sunday was the cold day, so luckily I had the kimono coat! It was a red-on-red day with the red hakata obi and red and white yabane patterned komon kimono. I had planned on wearing my new fake maru obi (Red, yellow, gold, and blue) but I was having trouble tying it at 7:30am. It was long, slippery, and non-cooperative. So out with the fake maru and in with the easy to tie hakata obi! I didn't have time to switch out the han-eri collar to a different color, so it looks a little odd to me, the light blue collar with the red outfit. (I think it should have been red or pale yellow). I did add the pale yellow obijime I had planned on wearing with the other obi anyway because it broke up the red. Since there were several puddles, I wore red tabi socks  instead of white tabi, which I figured would just get muddy. My zori are red and black and the handbag is red silk. It's a lot of red, I know. The kimono coat is pretty loud  in itself! A friend said my outfit was burning her eyes! That's when I knew it was pretty awesome. 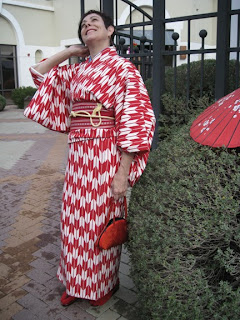 Shopping! I always plan on buying kimono bits and bobs each year and this one was no exception. Finding komon kimono, haori and a few yukata and obi is usually fairly easy, but this year I found accessory items that I usually never see: obiage and obijime. One dealer was even selling gorgeous full shibori obiage in rich colors like olive green, violet, and gold to wear with furisode for $50....a steal considering how beautiful they were. I'm too old for furisode anyway, so I had a good excuse to restrain myself!

I bought a vintage yukata and a haori, four fabulous obijime, one chirimen obiage, a tenegui, and one small plush Hello Kitty charm (impulse buy!), and of course a pair of Tofu Robot tabi socks. I will post photos of these items tonight or tomorrow.
~Rebecca