Sorry I haven't posted much, but I have been both busy and it's been really hot here. June is traditionally the hottest month here but the heat is taking the motivation right out of me! So I have had no interest in dressing up (no where to go this time of year except out for sushi) or even taking photos of coordination.

But I do have a fun item to share! I found this amazing item on ebay earlier this year and finally decided to do something with it today. It's virtually an antique, from the late Meiji or early Taisho. It's a glass photographic negative of a Ukiyoe woodblock print. Photos were probably taken of of original prints for reproduction purposes. 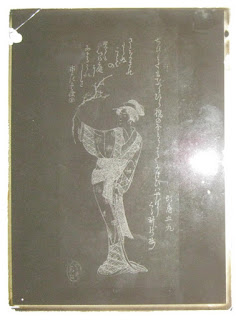 The glass itself is small, only 4.5" x 6.5" and very fragile. I bought it because one of the art-forms I enjoy dabbling in is alternative photographic processes, particularly cyanotypes.  Earlier today, I coated some paper with emulsion and did some time tests, seeing how long it would take to get a good print. The best print was 6-1/2 minutes in the sun. I'll play with this some more next week, but at least I know I can get a good print. So what to do with these? It's the perfect size for a greeting card and I can hand-color them if I want. Or collage it. Or just use it as is, put it in a cute little picture frame and sell them. It this proves to be something of interest, I might hunt down some more on ebay.

I enhanced the contrast and cropped it in Photoshop so you can see the details a little bit better. I think it's a pretty amazing little piece! Let me know what you think!
Have a wonderful weekend,
~Rebecca

I found this unusual yukata at the Phoenix Obon rummage sale for $10 so I wanted to share. It's soft and well-loved and I'm guessing a little bit faded. But I think that is part of it's charm. It also has a definite feeling of coolness because of the predominant pale blue-grey, blue and white of the design.

There are four different bird designs showing the four seasons! I love the little blocky houses and the pink leaves in the beaks of the birds; the birds remind me of doves carrying olive branches. Sorry that the image of the "spring" bird" (upper right) isn't whole but it's the only bird design that is cut off each time it repeats on the yukata. I think the design is really cute and special. It's on the small size...58-1/2" long , with a wingspan of about 50", but I can wear it with a tiny ohashori. I think I will pair it with a red/white or solid white hakata obi to keep the feeling soft and cool. It's in virtually flawless condition.
Let me know what you think of the design!
~Reb
6 comments: 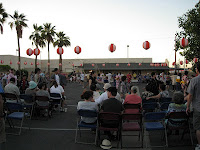 The Phoenix Obon at the Arizona Buddhist Temple turned out to be a pleasant surprise as well as the perfect opportunity to wear kimono and yukata! Despite the reservations about the hot weather, we (There were six in our group) all had a really great time. The dancing started a little after 7:00pm, so there was ample shade. The best part was there were many dances (I estimate at least 12-15!) and such variety. They even let the dancers take a welcome 15 minute water  break halfway through. A nice touch was they passed out boxes of kachi-kachi, tenugui, etc. for the dancers to borrow just in case you didn't have the correct accessory for the dance! 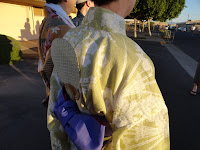 Some of the dances we did that I recognized from the west coast; at the least music was familiar: Pokeman Ondo, Tanko Bushi, Tokyo Ondo, Sakura Ondo, and a dance to "Accentuate the Positive" that made us laugh. This temple even has their own dance choreographed to a Beach Boys song- "Kokomo"!

There was also a rummage sale in the temple...(kimono shopping alert- look for a separate post) which yielded some nice surprises. Most of the items for sale were dishes but there were some gems in the rough. I found a crazy bird yukata for $10 and one person in our group found a komon kimono, an obi, and an obijime!

We arrived late enough to miss out on the bento box dinner, but they had to be pre-ordered anyway, so no worries. We ate before we arrived but some of us managed to find the shave ice and delectable homemade desserts on sale inside. 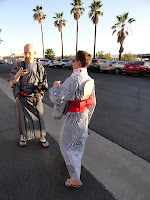 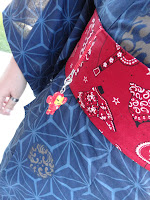 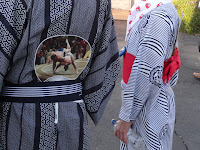 The whole experience was really nice despite the long drive for some of us. Next year, I'll gather a larger group together and we will leave much earlier so we can relax a bit before we dance. And next time maybe we will stay overnight to experience the bon service at the temple next morning.
Until next June!
~Reb

The Arizona Buddhist Temple will hold their Obon on June 9th and a group of us (mainly taiko people) are all going. I've never been to a Bon dance in Arizona, so this should be interesting. Of course, some of us are going in yukata and I'm loaning out a couple to people that don't own one but would like to look as festive as possible! Everyone else will be wearing happi.
I was thinking of wearing my new yukata for obon, so I was coordinating obi, geta, etc. For Bon dance, you need extra accessories since each dance requires a different "prop": a folding fan, uchiwa fan, kachi-kachi, and a tenugui. It's summer here and hot as usual, so I didn't bother trying everything on but I tried to lay it out nicely. 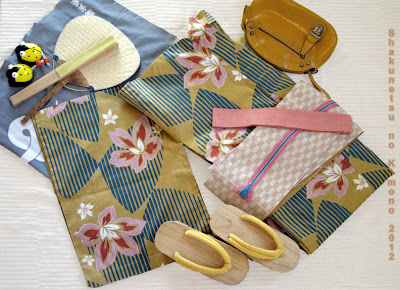 My new gold yukata arrived, so of course I'm itching to wear it. My cream/beige yabane obi looks really good with it. I was originally thinking a red or pink obi but the flowers are more subdued. The red is more of a rust color, so I'm going for a soft, toned down look here. I've added a rust and cream print han-eri (looks salmon in the photo), a pink and teal obijime for a bit more color, yellow geta, fans, and my yellow ladybug kachi-kachi (similar to castanets). I've added a grey tenugui and lastly, my trusty gold clutch purse. A light-colored straw or linen handbag would give more of a feeling of coolness, so I may go on an excursion to the accessory store at the mall later this week.

It will be very hot in Phoenix (Probably about 105°F) and after some research, I discovered they do have their Bon dance outside, they just seem to start it late enough so it's almost dark when it gets underway. That should help with the heat a bit. If I'm feeling like I will need to be even cooler, I may just ditch the juban and han eri!
Let me know what you think and I'll post some Obon photos next weekend!
Cheers,
~Reb
2 comments: