What do you do when you have 2 weeks to come up with a really cool, Okinawan and Japanese-inspired costume for an upcoming performance? You do a lot of research and you create something over-the-top, dramatic, and theatrical. Accuracy is not an option with only 2 weeks lead time, so it's just about looking like some kind of Japanese-Okinawan performer. 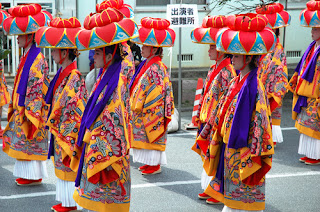 Why all of this? I'm performing with my taiko group at Flam Chen's "Cannibal's Cabaret", a show on February 12th. 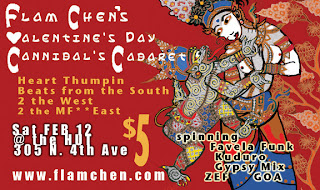 We are jamming to a modern Japanese-techno song "Koza Riot" by  Ryukyu Underground.  I'm going to be a "dancer" and I'm coming up with my own costume. Since I'm the only one playing this part, I have a huge amount of creative license. Since the music is inspired by the dance clubs on Okinawa, I'm going to base my costume very loosely on the gorgeous bingata kimono of the Eisa dancers as well as some traditional Japanese kimono elements. My main obstacle is the fantastic hats they wear, the hanagasa. Since this is a public performance at a club, most people there will know nothing of Japanese costumes or dance. I feel the hat is going to be the essence of the costume, the most important thing to distinguish me as something other than the typical Geiko or Maiko or Kabuki dancers, something the club-goers might already be familiar with. (I don't want to hear people keep asking "are you a geisha?") These hats look like a giant red lotus and are really beautiful. In the next few days, I'll be working on the structure of the hat and trying to create something similar in my art studio. 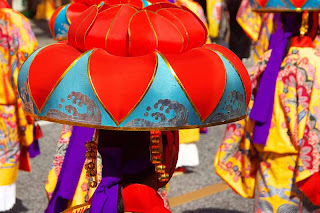 For the kimono, unfortunately I don't own a bingata-style kimono (I can't order one from Japan in time either!) nor anything in that rich yellow you see in the photos below except maybe an obi. But I do have a kimono that might work. My color scheme is going to be mostly red & white with some of the bright yellow and that brilliant blue-violet. The crew may be able to make the kimono look yellow with lighting, but I think as long as the colors are bright and high-contrast, and I have the hanagasa, I'll at least look good enough for a 7-minute performance.
I'll keep you updated on how this goes, including photos!
Here are some of the images I'm using for inspiration: 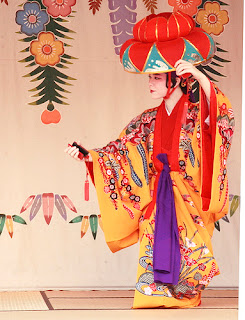 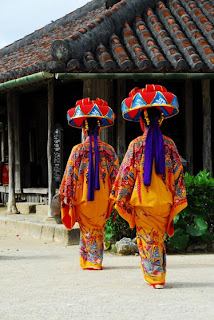 This obi looks like it's ready for a festive occasion! I was attracted to this obi becasue of the color: I'm a sucker for anything fuchsia, magenta, red-violet, or hot pink. And from what I have seen in my few years of kimono collecting, red-violet is not that common of a color in kimono or obi and accessories. Medium pink, dusty rose, and bubble-gum pink, yes; but deep, rich reddish purples seem to be rare. So when I see something in this color, I usually consider it. But then again, I seem to be attracted to unusual colors and patterns, motifs that seem outside the commonplace sakura (cherry blossom) and ume (plum).
The arabesque swirls or karakusa in metallic silver thread give this nagoya obi a touch of elegance and the fun colors of the flowers (Possibly thistle or bell flower and some springs of bush clover?) make me think of matsuri. The bright red, yellow, and turquoise green of the flower pattern gives the design a youthful feeling and the silvery spirals give the whole design movement.
The silk is very soft and bordering on translucent, but it doesn't seem to be ro or sha. It does have a very slight ribbed texture though, so I'm not sure of the type of fabric. I will venture that this is probably a spring or summer season obi, but I won't be absolutely sure until I show this to some other kimono enthusiasts to see what they think of the design. It's from Kyoto Antiques and in virtually perfect condition. 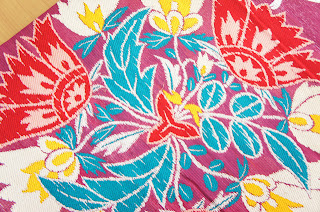 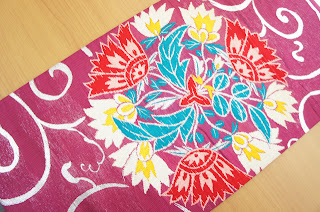 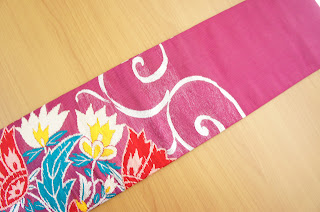 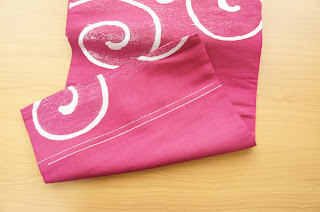 This might be gorgeous paired with my red and yabane kimono or if it's seasonally appropriate, it would be a perfect match with my sheer black ro summer komon with the garnet-red flowers. I'll have to see how it coordinates and hopefully be able to wear it soon....maybe to the Cherry Blossom Festival in Seattle!
No comments: