The weekend started Friday afternoon when I arrive our hosts home outside Phoenix. I gave Emma two of the new kimono and an obi I received from Yamatoku as gifts. Before the other guests arrived and dinner was ready, we had an impromptu kimono try-on session. I picked kimono that would go with what she already owned; she tried on the "faux batik" komon with two different obi. I used my own obiage and obijime since she is lacking in accessories. She loved the gold-tan obi with the kimono. 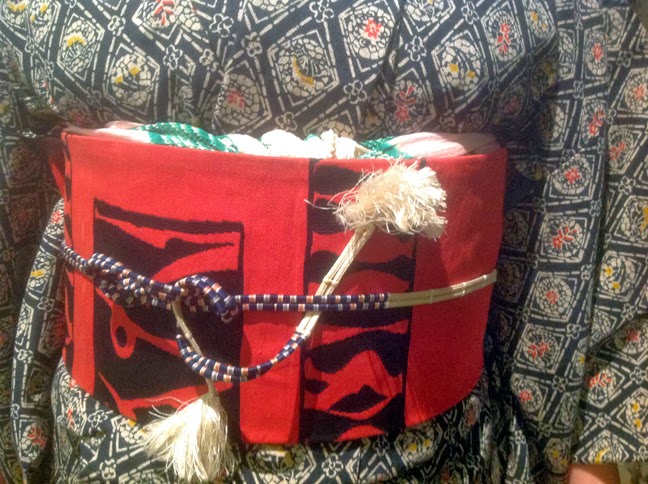 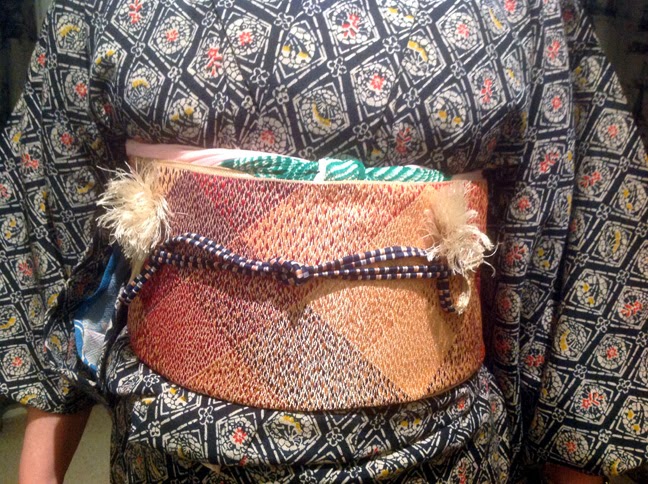 The next morning we were all up really early so we could be in downtown Phoenix at about 8:30am to unload drums, set up for two days of taiko, and be ready for the mikoshi parade at 10:00am. I was playing taiko at noon, so I didn't wear a yukata or kimono in the parade. However, Emma wasn't scheduled to play taiko until later, so I dressed her up in her new ayame (iris) yukata. 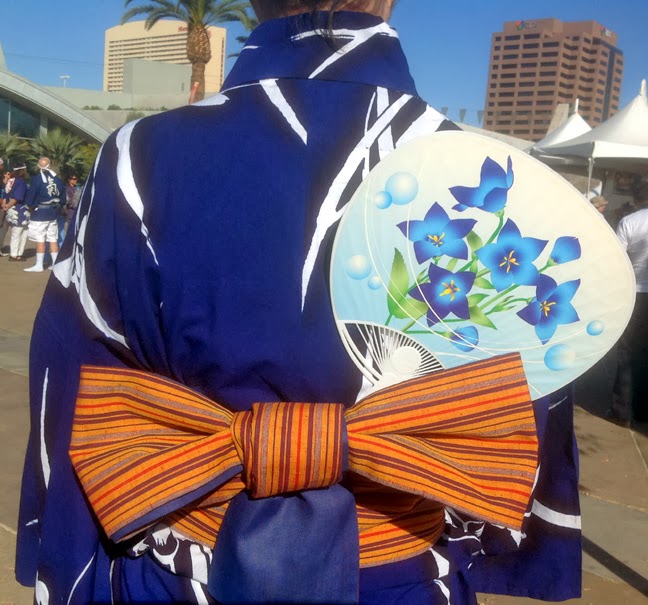 However, arriving at the parade in just a taiko shirt, black pants, and a black logo jacket wasn't very festive, so I went shopping as the merchandise booths were setting up and found a cute happi
coat to wear in the parade!

The vendor said "Shimoshin" was the name of a company. I like the bright blue color and the waves. 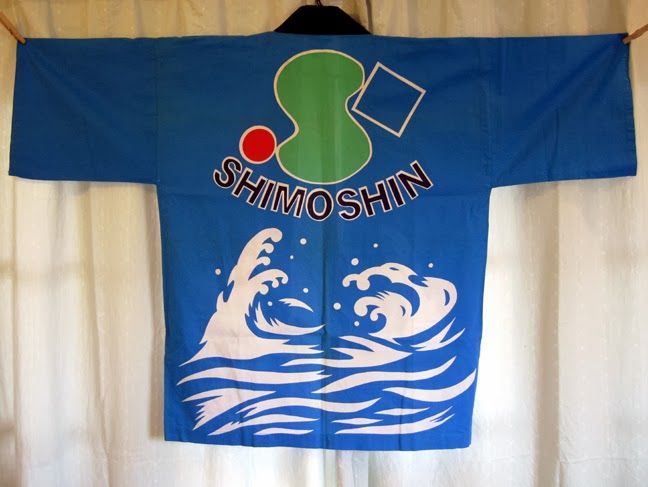 The mikoshi parade is getting larger every year, and this time the Awa Odori Tokushima-Ren from LA were back again after a hiatus. My arms were tired after only 20 minutes of dancing!
It was warmer than average over the weekend and on Saturday when my taiko group, Odaiko Sonora, played at noon, it was probably about 80 F with a gorgeous clear, blue sky. That doesn't sound too bad, but we were looking directly into the noon sun; stage is not covered! Afterwards, we all went to the beer and sake garden for shade and beverages. I didn't realize I had a sunburn until later. Oops.


Sunday was kimono day for me at least. Besides dressing Emma again and Karen (Sensei and one of the directors of Odaiko Sonora) in yukata, I wore a hitoe kimono I bought at matsuri last year.

Karen brought her gorgeous vintage shibori yukata and beautiful obi she bought at Ichiroya a few years ago and I dressed her after she played taiko. She wanted an obijime to dress up her obi as well, so we went over to Maruhachi's booth  and went shopping! Karen picked out a lovely flat weave in a lime green with metallic threads. I also shopped for Emma since she wanted a few obijime as well but she was playing taiko all day and couldn't shop. So I picked out three for her: a solid red, a cream with gold flecks, and a flat weave with several shades of purple to go with the purple komon I gave her. I found a fabulous red and silver obijime for myself, which Karen bought for me as payment for dressing her up! 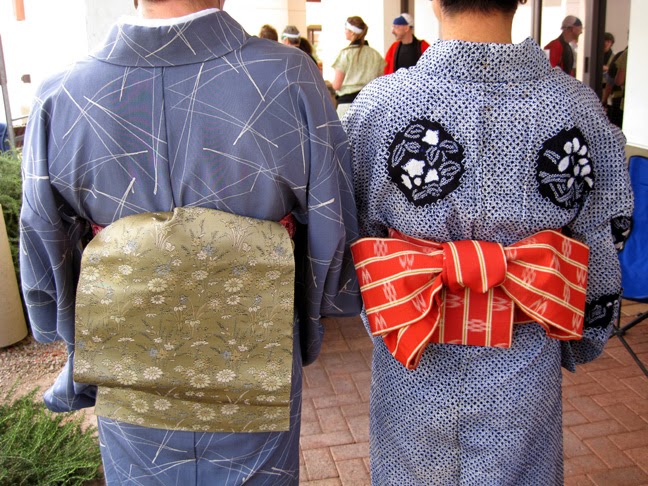 Sunday was warm again but a bit cloudier, which helped. I wore a blue-grey hitoe (unlined) komon featuring a pattern of pine needles paired with an olive green multi-season Nagoya obi, also hitoe. 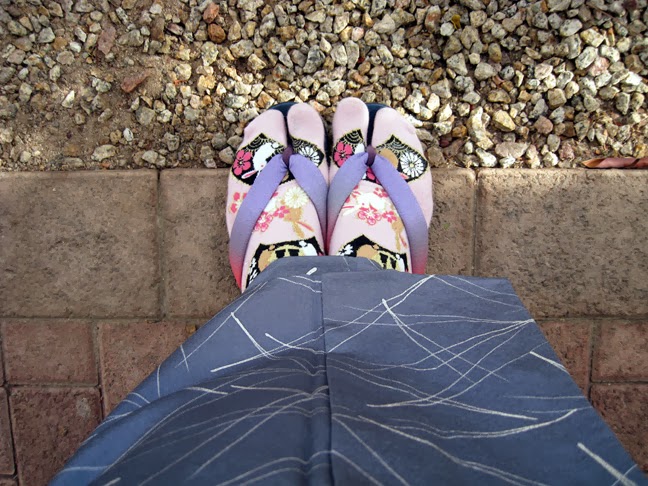 Sunday was much more relaxing, and I got to watch powerful taiko performances, shop for kimono and accessories, enjoy the shade of the beer and sake garden, sample yuzu lemonade with cherry syrup and again (it was soooo good!) with violet syrup, tried some peanut butter mochi, shared bright red (dubbed "hummingbird food") shave ice with two other people since it was sooo huge, and watched people in their fun and sometimes crazy costumes. The drive back to Tucson was the worst part! Luckily, I have Monday off from work to recover. 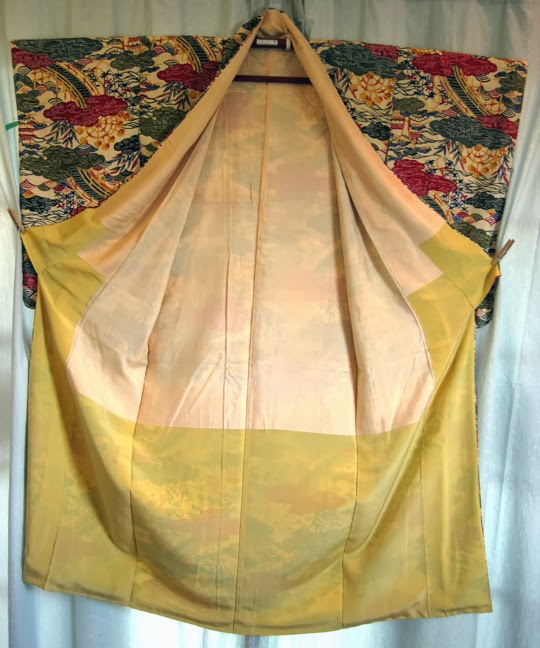 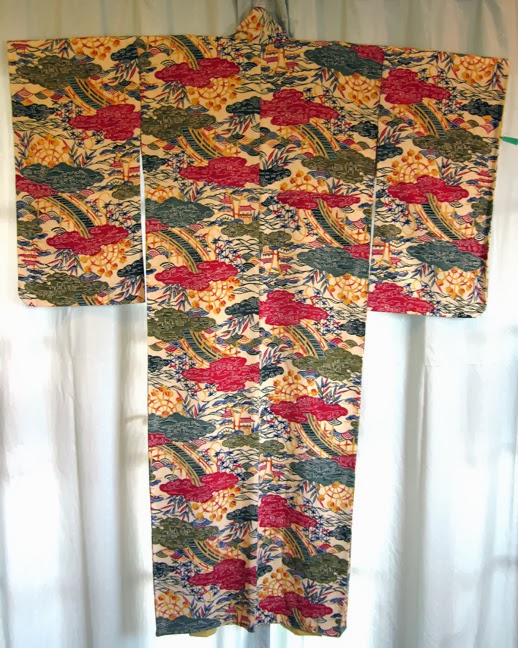 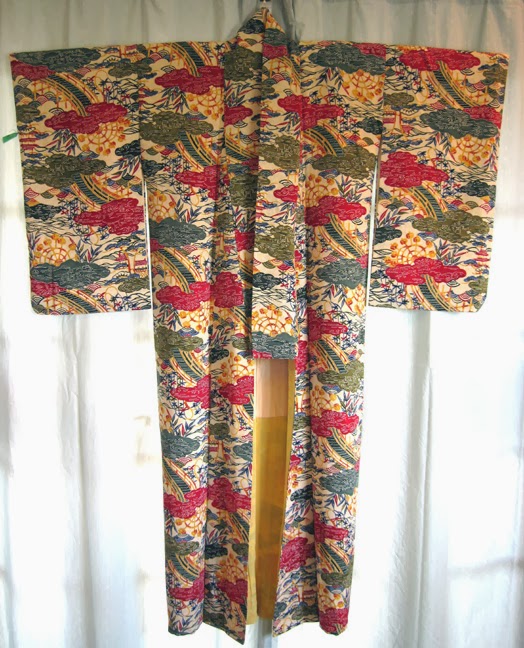 Oh, and I bought a kimono from Maruhachi. I wasn't supposed to but it's totally awesome bingata! And it has 26' long sleeves! Can't wait to wear this one. It's in almost perfect condition, with spots only on sleeve lining. I may have to pair a hakata obi with this one.


There are a few more kimono-wearing events coming up, so stay tuned for more blog posts in the near future!
Cheers,
Reb