I saw Odaiko Sonora at The Rogue Theater Saturday night. It was a wonderful show and a really nice venue for taiko though it was a small theater
It is now the kimono-wearing "season" where I live, so I took advantage! I wore the new striped hitoe (unlined) kimono I bought this summer with a tsuke (pre-tied or easy obi), and a new obijime. The stripes are considered a multi-season motif but the colors look like autumn to me, so I paired the casual kimono with an golden tachibana (a type of citrus) for a little bit more formality and to play up the autumn theme. The autumn colors were continued with the multi-colored obijime and red obiage.

Here is a refresher image of the kimono fabric and kitsuke bits, including the sample fabric juban (under kimono). 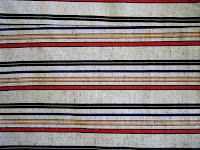 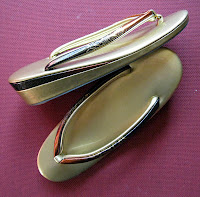 I chose the hitoe kimono since I was still kind of warm during the day (90 F today!) but much cooler at night with just a twinge of fall chill in the air. I posed for photos just as the sun was going down, hence the subdued colors.

Shortly after this photo, I decided to change from plain white tabi to fun tabi sox! I didn't get a full-length photo since it had already gotten too dark and I need to get going to the show. The sox matched perfectly and were really fun to wear. A nice alternative to formal tabi with the right outfit. 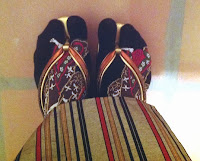 It was a great outfit to wear; the hitoe kimono was very comfortable and I really love this kimono. The stripes give it a very crisp look and looks little more modern. The tsuke obi felt a bit weird since this was the first time I'd worn a pre-tied obi! But it was really easy to wear. However, for this style, you still need the obiage, makura, and obijime just like when you wear a regular Nagoya obi.
The next kimono-wearing event is October 19th in Phoenix. Stay tuned until then!
~Reb