Breaking in the New Year with Calligraphy! 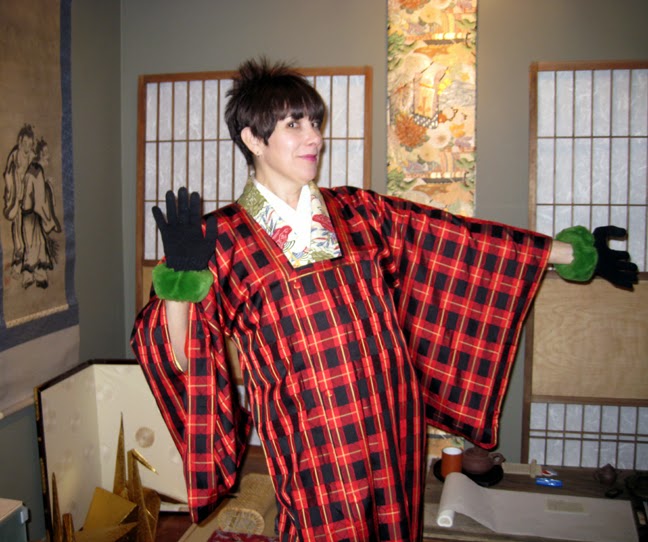 Yesterday, I went the the New Year's Celebration at Yume Japanese Gardens- there was an art show and calligraphy demo-workshop by Yoshi Nakano, hanafuda games, and the gardens were open. Of course I wanted to show up in kimono but mostly I wanted to try my hand at calligraphy and see Yoshi-san in action!

Yoshi-san was demonstrated his zen calligraphy in the classroom and afterwards I went outside to see the garden. The was a new dry stream with bridge, and the garden looks really nice right now. The koi were hiding and the pomegranate tree had lost it's leaves but the bamboo was lush and green from the recent rains. Most everyone was inside playing hanafuda or at the workshop, so the garden was very quiet.

There were no ceremonies in the tea house, so I used it as a photo backdrop. The weather was sunny but chilly, about 55 degrees, so I wore my red plaid kimono coat and my gloves with the furry green cuffs. You might notice that the bingata kimono I'm wearing is the same as last time I was there (See entry for Oct. 6) but I changed the obi to red and blue hakata. I mainly wore the kimono again because it has pine and bamboo motifs on it- pine, bamboo, and plum are traditional for the lunar new year. I tried for all three "Sho Chiku Bai " motifs, but I don't have much plum. However, the lining of the coat has plum blossoms. So I just barely made it! Sadly, I do not have a kimono or obi with with a ram motif. That would be very cool!

Next Saturday is Mochitsuki, so stay tuned for more photos of Japanese culture in Tucson well as a different kimono!
~Reb