A Few Photos from a Day in Phoenix

Some friends and I went to the "Strolling in Yukata" event at Ro Ho En on April 27th. It was really nice....and almost too hot for strolling! At 4:30 in the afternoon, it was in the 90's. They had more activities and entertainment this time, including folk dancing. However, people were dancing in the sun, so we sat in the shade, drank sparkling sake, and just watched! 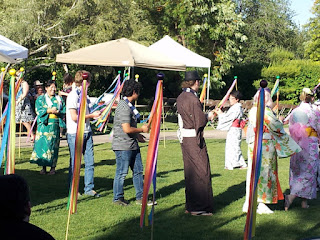 I recognized the music and dances from Obon...of course, since it's not Obon season, so it was just called folk dancing. Shade would have been a really good idea and probably would have got us out of our seats to dance.
I forgot my camera (D'oh!), so I only took a few photos with my phone. Friends took lots more photos, so maybe I can post some more photos soon! 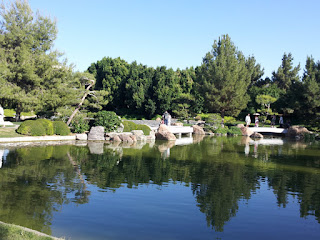 Despite the typical spring in Phoenix weather, the garden looked gorgeous. There were baby ducks in the pond competing for food with the koi, a few remnants of blooms on the jacaranda trees, some iris blooming under some trees, and the grass was very green, which looked cool and inviting. 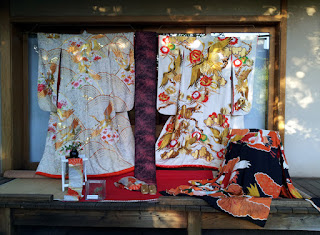 Unfortunately, the tea house was closed but they had a nice kimono display outside featuring two uchikake hanging up, which is a special kimono worn like a coat (no obi) over the kakeshita, the wedding kimono. There was also a few other items: obi, formal gold zori, and what looked like a black furisode.

While we were there, we did hear a rumor that they would move up the strolling event earlier, probably because of the hot weather. It would be great if they could make it in March after Matsuri! It would benefit everyone....attendees, entertainers, and of course bring more people in if the weather were a bit more hospitable! Making it a bit later in the day would be nice as well...maybe 5pm-9pm.

Afterwards, we all went to Cibo for pizza and hung out on their beautiful patio- still dressed in our yukata. At 8:30pm, the temperature outside was absolutely perfect!

If I get any more photos, I will be sure to share!
Ciao,
~Reb